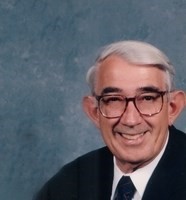 James C. "Jim" Patterson passed away on September 29, 2020 in Houston Texas after complications due to kidney issues. Jim was born May 8, 1929 in Oxford, Arkansas, to Davis S and Vera M Patterson.

He is survived by son Mark Patterson, and daughter in law Laura Patterson of Houston Texas; daughter Nancy Patterson of New Orleans Louisiana; son in law Ben Cleary and grandson Alexander Cleary of Mechanicsville Virginia and many more nieces, nephews and friends. He was preceded in death by his wife Marjorie and daughter Catherine Cleary.

Jim attended primary and secondary school in Jonesboro and Little Rock Arkansas. He graduated in 1947 from Little Rock senior high school. While in high school he worked part time for Southwestern Bell Telephone Company earning money to take flying lessons. He obtained his private license at age 16. Aviation was a lifetime interest. Following high school graduation, he began studies at Little Rock Junior College transferring to the University of Arkansas at Fayetteville, where he received a Bachelor of Science degree in zoology and chemistry in1950.
When the Korean war started June 25, 1950, Jim received notice from his draft board to report for duty. He trained for 13 weeks at Chaffee Arkansas and Fort Sill Oklahoma before he shipped out for Korea. He was subsequently assigned to the 64th field hospital in Pusan as a chief medical laboratory technician, a position he held until his honorable separation on December 30, 1952.

Military service now completed, he traveled to Dallas, Texas and was immediately hired by National Geophysical Company (NGC) to work on seismic crews. In May 1954 he accepted a job with Continental Oil Company again working on seismic crews. While working for Continental later "Conoco". He developed a passion for geology and geophysics. He loved the challenge of the search for hydrocarbons. Jim worked 37 years for Conoco retiring in October 1991 as vice president for Exploration and Production North America.
Jim's job with NGC brought him to Rawlins Wyoming in 1953 where he met and married Marjorie Davis, his wife for 57 years. They moved frequently living in Los Angeles, New York, and many places in between. In 1969 Jim received a promotion and moved to London England with his family. The family took many fun vacations around Europe during this time. Jim had many interesting stories of his work travels to the Middle East, Africa and Europe. The family lived overseas for about 12 years with residences in London England and Cairo Egypt. These were exciting times, made even more so by the many close friends they made in diverse parts of the world.

Jim and Marjorie enjoyed their retirement years. He renewed his private pilot's license, purchasing a Cessna, he enjoyed time spent in the hanger he built at the west Houston airport and flying. They traveled extensively. During the summer, Marge and Jim escaped the Houston heat at their home in Dillon, Colorado indulging in long mountain hikes and fishing adventures. For the past 8 years Jim has resided at the Buckingham retirement home in Houston where he made a lot of friends. He was active in the men's book club and bible studies.
Jim was a member of numerous professional organizations including the S.E.G., AAPG "Associate Member", G.S.H., H.G.S. and the University of Texas (UT) Geology Foundation Advisory Council where he served as chairman for 2 years. He established the James C. Patterson endowment fund for excellence in the geophysical sciences at UT.  James joined HGS in April 1984.

Jim will be remembered as a devoted husband and family man who spent many quality years helping raise his children. Jim was a man of faith and hope being a lifelong member of the Church of Christ. The memories he gave his family will last forever and he will be greatly missed.

This Remembrance was summarized from the Life Tributes section of the Houston Chronicle on October 2nd.