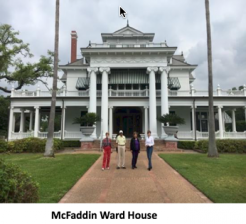 In April 2017, Martha Broussard led a Field Trip for the HPAC to Beaumont to tour three sites that are connected to the discovery of Spindletop Oil Field. Originally named Tevis Bluff, Beaumont came into being as a city in 1901 with the discovery of the Spindletop Lucas Gusher. 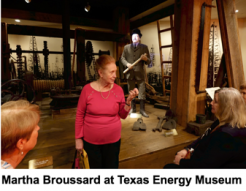 Ward House. Built in 1906 -1908, this beautiful beaux-arts colonial mansion showcases the lifestyle that became a part of the aftermath of finding Spindletop.

After lunch, they visited the Texas Energy Museum which has talking robots who will tell us about the effects of Spindletop and the beginnings of the modern petroleum industry. Last stop was Spindletop itself. It used to be a “beautiful mountain” caused by a salt dome intrusion but the oil removed in the early years and again in the 1920’s when deeper oil was found now make it a depression. They also visited a replica of the  Gladys City Boom Town that was built near the site of the Lucas Gusher. 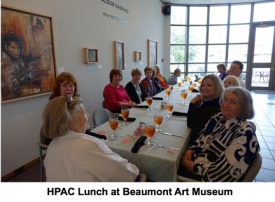