HGS General Dinner- How a Carbon Tax Could Benefit US Producers

Registration is closed for this event
The CFD program, if enacted nationwide, would within a decade begin the elimination of coal usage for electrical power generation while incentivizing carbon capture and storage (CCS) for NG. 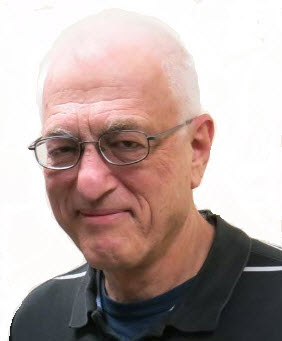 How a Carbon Tax Could Benefit US Natural Gas Producers, But How Much and for How Long?

The analyses presented show how a Federal carbon fee could benefit US natural gas (NG) producers while meeting the COP21 goal of avoiding an increase in global temperatures of +2oC (3.6oF) above pre-industrial levels (Rine, 2020). Absent a Federally mandated carbon tax, however, unilateral reductions in production by petroleum companies could result in costly opposition from stockholders and investors. The basis of the analyses are modeled responses to a 25-year national carbon fee & dividend (CFD) program beginning in 2025 at $10/metric ton (t) of CO2 emissions and increasing annually by $10/t.  The CFD program, if enacted nationwide, would within a decade begin the elimination of coal usage for electrical power generation while incentivizing carbon capture and storage (CCS) for NG.  In theory, US NG producers with a CFD stimulated CCS program could not only attain an 80% drop in US carbon emissions by 2050 (for combined coal and NG usage), they could produce more NG than following a business as usual approach (BAU; Figure 1).

Also addressed are how growth rates of renewable energy and cost of commercial energy storage might impact US demand for NG (Rine, 2019). Present day levelized costs of energy from new commercial-scale solar and wind powered facilities are already competitive with NG facilities.  But growth of US renewable energy projected by the Energy Information Administration (EIA) for 2025 to 2050 (~130%) is a fraction of the growth necessary to replace fossil fuel usage by 2050.  Other studies of past growth in renewable energy calculated that between 2004 and 2010 there was a growth of approximately 300%. Assuming the EIA projected growth through 2024 is correct (~160% from 2015 to 2024), growth in renewable energy would have to exceed 700% from 2025 to 2050 to completely replace energy produced from NG and coal. This unprecedented growth requirement indicates there will be continued need for energy from NG during this period. The competitiveness of commercial- or municipal-scale battery storage versus NG powered peaking plants is difficult to predict because of the large variability in both the levelized costs of energy from gas peaking plants and storage costs for batteries. Present-day estimates for low-cost battery storage could replace high-cost NG peaking plants immediately after instituting a CFD plan. Whereas a low-cost NG peaking plant may still be competitive decades after the initiation of an annually increasing carbon fee. 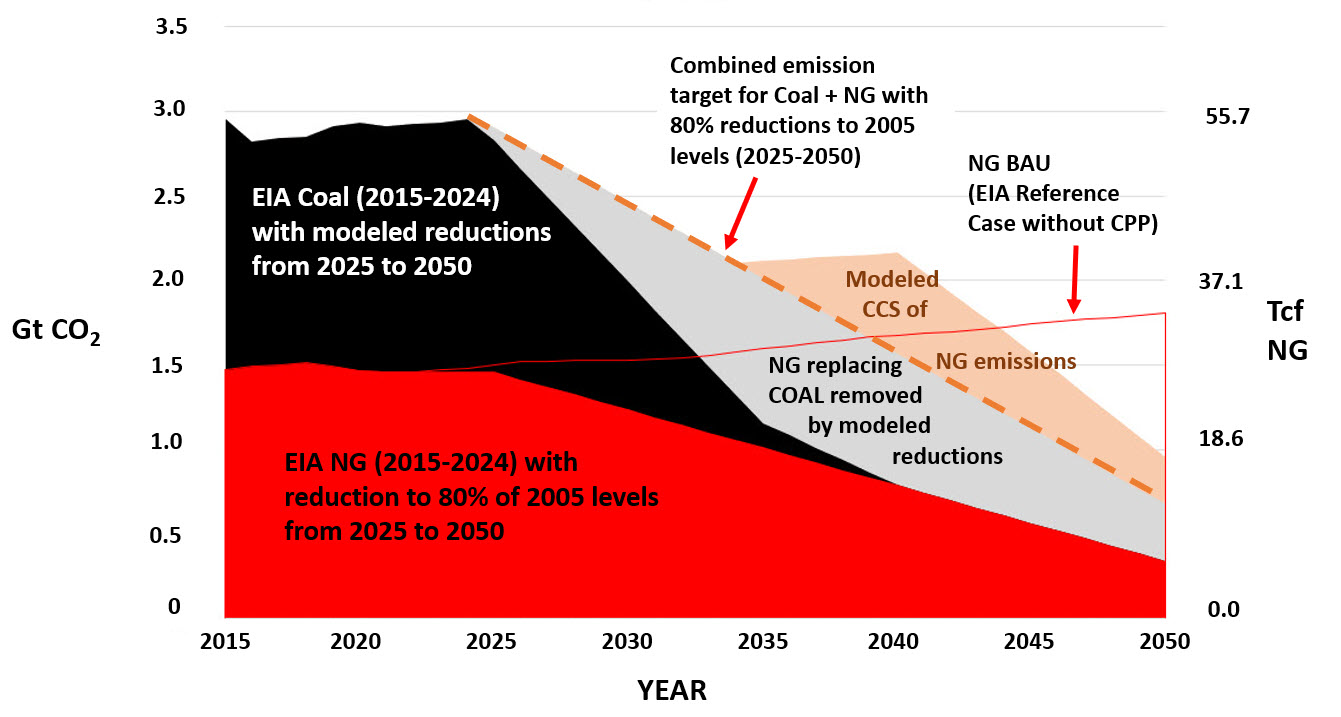 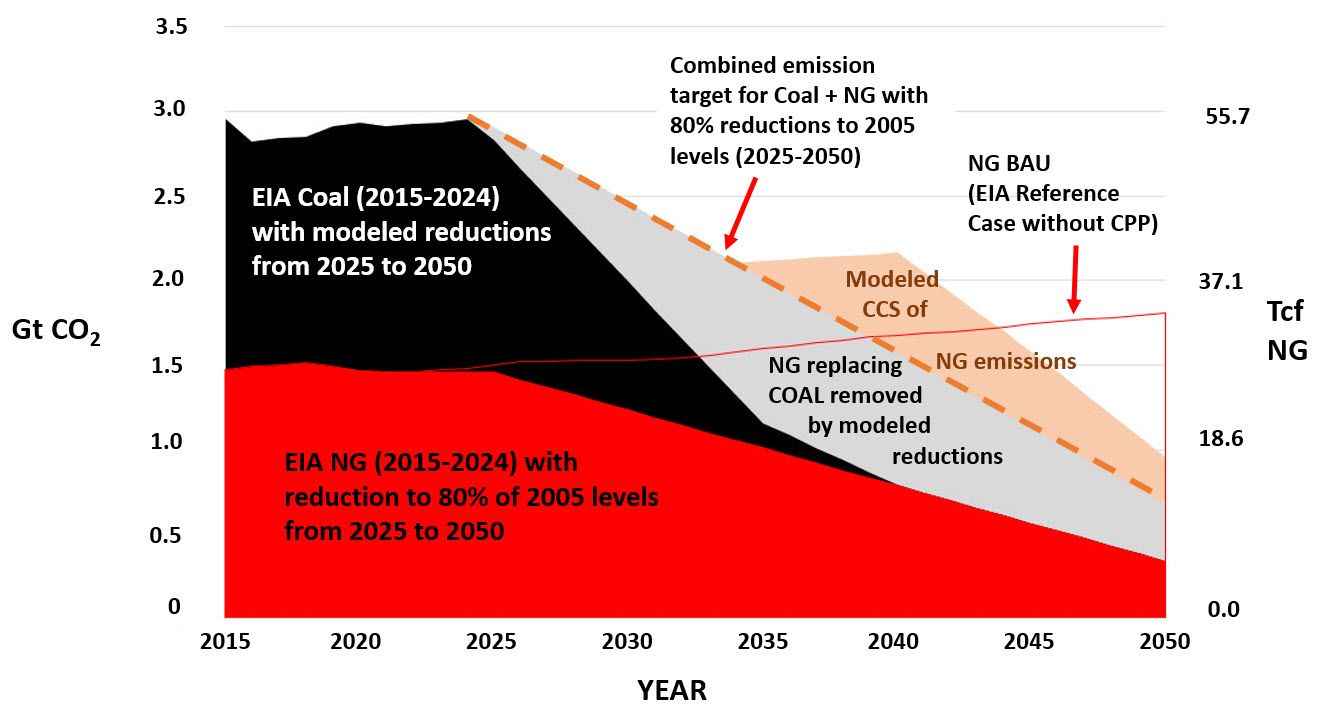 Figure 1. Figure graphically illustrates the relative CO2 emissions (in gigatonnes [Gt]) and consumption of natural gas (NG) and coal within the United States from 2015 until 2050 under the scenario proposed in Rine (2019a). Emissions levels between 2015 to 2024 are based on US Energy Information Administration (2017) projections without the Clean Power Plan (CPP). Emission reductions starting in 2025 reach 20% of 2005 levels by 2050. This scenario incorporates early termination of coal usage and utilization of carbon capture and storage (CCS) based on the Citizens’ Climate Lobby (2014) model (Figure 2) but extrapolated to 2050. The NG emissions sequestered by CCS (pale orange) are not tallied with the total allowable emissions. From Rine (2019a). 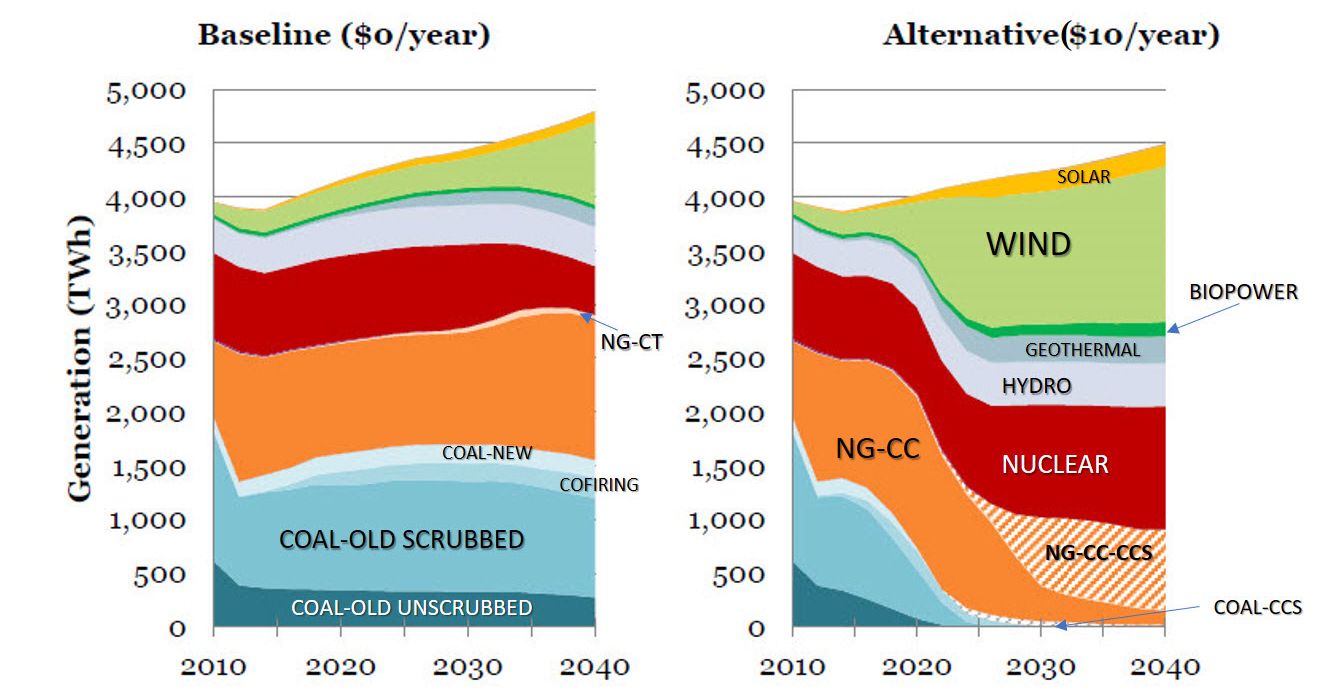 Rine, J.M., 2019, How a Carbon Tax Could Benefit US NG Producers, But How Much and for How Long?, AAPG Annual Convention and Exhibition (ACE 2019), San Antonio, TX, poster presentation, accessed December 18, 2019, http://www.searchanddiscovery.com/pdfz/documents/2019/42392rine/ndx_rine.pdf.html

James (Jim) M. Rine earned a Ph.D. in 1980 at the University of Miami where his research on modern shallow marine siliciclastic muds received the 1985 SEPM outstanding paper award with R. N. Ginsburg. Rine’s other published research includes shallow marine and deltaic sedimentation, groundwater hydrogeology, porosity characteristics of siliciclastic mud rocks, and the relationship of the petroleum industry to climate change. Jim¸ who currently is an adjunct professor within the Department of Geology at Wayne State University, has spoken numerous times to HGS over the past three decades.

Please help us and let your friends, colleagues and followers know about our page: HGS General Dinner- How a Carbon Tax Could Benefit US Producers

You can also share the below link in an email or on your website.
https://www.hgs.org/civicrm/event/info?id=2125&reset=1
empowered by
CiviCRM