The Sedimentary Record of Antarctica’s Contribution to Sea-Level Changes

Today, Antarctica is covered by an ice sheet that, if it were to melt, has the capacity to contribute on the order of nearly 60 m to global sea-level rise.  Most of that ice is stable, and is expected to be so long into the future, but parts of the West Antarctic Ice Sheet, particularly Thwaites and Pine Island glaciers, are susceptible to sudden retreat, or even "collapse."  In the past, the ice was significantly expanded, reaching the continental shelf break around most of the margin.  As the ice sheet retreated to its modern extent, the shrinking ice left behind a sedimentary signature of deglacial history.  Over repeated cycles of glacial advance and retreat, in some places at least since the latest Eocene, sedimentary deposits of alternating glacial and interglacial periods have built up on the continental shelf and slope.  Because the stability of the Antarctic Ice Sheet is strongly influenced by the ocean, the sedimentary deposits from the ice-ocean margin are the ideal place to study the controls on stability or instability of the ice.

This talk will focus on using the sedimentary record from the West Antarctic margin, by combining geophysical survey data, including 3.5 kHz profiles, seismic data, and multibeam swath bathymetry, with both gravity and drill cores, to map the past extent of the ice, determine the chronology of glacial cycles, and estimate the controls on glacial stability.  Data will be presented from three different time periods.  First, we will review data from deep-water sites, beyond the glacial limit and thus not susceptible to erosion, where drill cores have recovered continuous records of glacial cyclicity since the Neogene, allowing correlation to global sea-level records.  Next, we will examine records of retreat since the last glacial maximum, at the end of the Pleistocene, where the difference in timing of retreat in individual drainage basins can be determined.  Finally, we will look at the sedimentary records from where Thwaites Glacier has retreated over just recent decades, allowing an examination the factors influencing the ice today and how they differ from past periods. 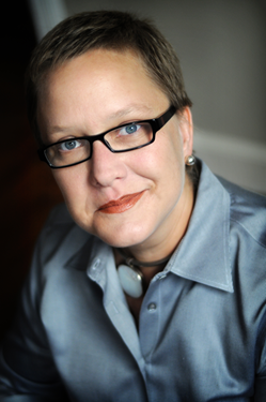 Wellner is a marine geologist who works primarily offshore Antarctica on questions related to the sedimentary record of glacial variability, climate history, & sea-level change. Wellner has completed over a dozen ocean-going cruises collecting geophysical data, surface samples, & drill cores, including ten seasons in Antarctica. Most recently, she served as the Co-Chief of International Ocean Discovery Program (IODP) Expedition 379, Amundsen Sea West Antarctic Ice Sheet History. Next season she will be back in Antarctica as part of the International Thwaites Glacier Collaboration.

She & her students also work in the Gulf of Mexico, examining details of recent stratigraphic units as analogs for petroleum reservoirs & on coastal response to sea-level rise. They use donated data as well as collect new data in shallow water using their own boat, the R/V Mishipeshu.

Julia completed a tour as an American Association of Petroleum Geologists (AAPG) Distinguished Lecturer in 2016 & now serves on several AAPG committees. She volunteers to lead coastal field trips for many local meetings, including the upcoming 2020 AAPG meeting.

She earned her Ph.D. in 2001 in geology & geophysics from Rice University, where she also completed a post-doctoral fellowship.  She has been at the University of Houston since 2006 where she teaches stratigraphy, sequence stratigraphy, marine geology, oceanography, & field courses in facies interpretation. She received the Outstanding Faculty Award from the UH Alumni Association in 2015 & served as a UH Energy Fellow in 2016-2017.

Please help us and let your friends, colleagues and followers know about our page: HGS Annual Sheriff Lecture: The Sedimentary Record of Antarctica’s Contribution to Sea-Level Changes

You can also share the below link in an email or on your website.
https://www.hgs.org/civicrm/event/info?id=2109&reset=1
empowered by
CiviCRM