Wednesday, December 12
Black Lab Pub, Churchill Room • 4100 Montrose Blvd.
Social 5:30 p.m., Dinner 6:30 p.m., Presentation 7:30- 9:00 p.m.
Cost: $30 Pre-registered members; $35 non-members & ALL walk-ups (Credit Cards Now Accepted)
$15 Emeritus/Life/Honorary; HGS Students Members: FREE
To guarantee a seat, you must pre-register on the HGS website and pay with a credit card.  You may walk up and pay at the door if extra seats are available.  Please cancel by phone or email within 24 hours before the event for a refund. Monday scheduled HGS meetings need to be canceled the Friday before by 2 pm  Online & pre-registration closes Wednesday, December 12, at 5:00 a.m.

Big Bend Ranch State Park (BBRSP), is the largest of the Texas State Parks covering an area of over 300,000 acres (~1200 square kilometers). The scenery is magnificent and the landscape varies from river lowlands, through deep canyons, across high plateaus, and up steep mountains. Ultimately all of this is controlled by the character and variety of the underlying geology and the processes that created it over millions of years. 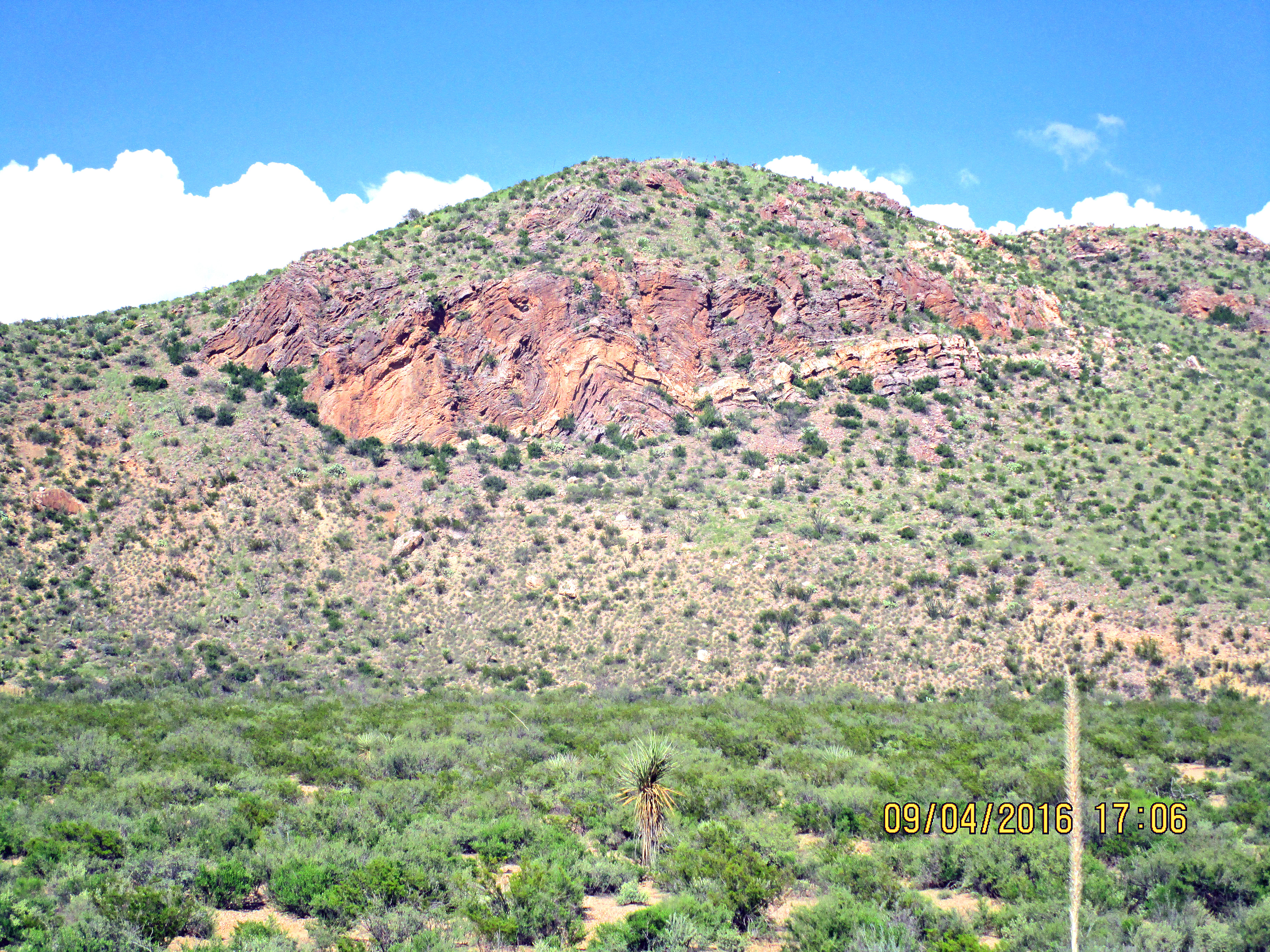 But why a Crossroads of Geology?

Because, the park’s southern boundary follows the Rio Grande from about 10 miles below Presidio through a series of Basin and Range grabens for some 40 miles down-river to Lajitas at the northwest corner of Big Bend National Park. Extensive Cenozoic-age volcanics and intrusives make up the Bofecillos Mountains in the central part of the Park, while the Solitario Dome covers the northeastern corner where early Cretaceous-age limestone mark the flank of the dome and Paleozoic-age chert, sandstone, limestone, novaculite, and shale are exposed in its core.  And finally, in southeastern BBRSP early Cretaceous-age shale, marl, and limestone are exposed along the Fresno-Terlingua Monocline.

Furthermore, four of the major orogenic events that mark the development of North America converge in BBRSP. 1) The Ouachita/Marathon foldbelt extends through the Marathon Basin and can be seen in the interior of the Solitario Dome, where exceptional exposures of highly deformed Siluro-Devonian Caballos Novaculite occur. 2) The Laramide foldbelt is also represented in the Park, particularly where the lower Cretaceous Santa Elena, Del Rio, and Buda Formations are asymmetrically folded along the Fresno-Terlingua monocline. 3) Undoubtedly, the most dramatic geological event represented in the Park is the mid-Cenozoic volcanism that built up the Bofecillos Mountains as part of the very extensive Trans-Pecos Volcanic Province. 4) And finally, along the south edge of BBRSP, the route of the Rio Grande follows Basin and Range age sediment-filled grabens, marked by long, continuous normal to oblique slip faults exposed along very prominent fault scarps.

So, come on out to Big Bend Ranch State Park and watch for the evidence of all four events. Revive your appreciation for the geological enormity of time and scale and the resulting variety of landscape and scenic beauty, both natural and historical, here at the Crossroads. 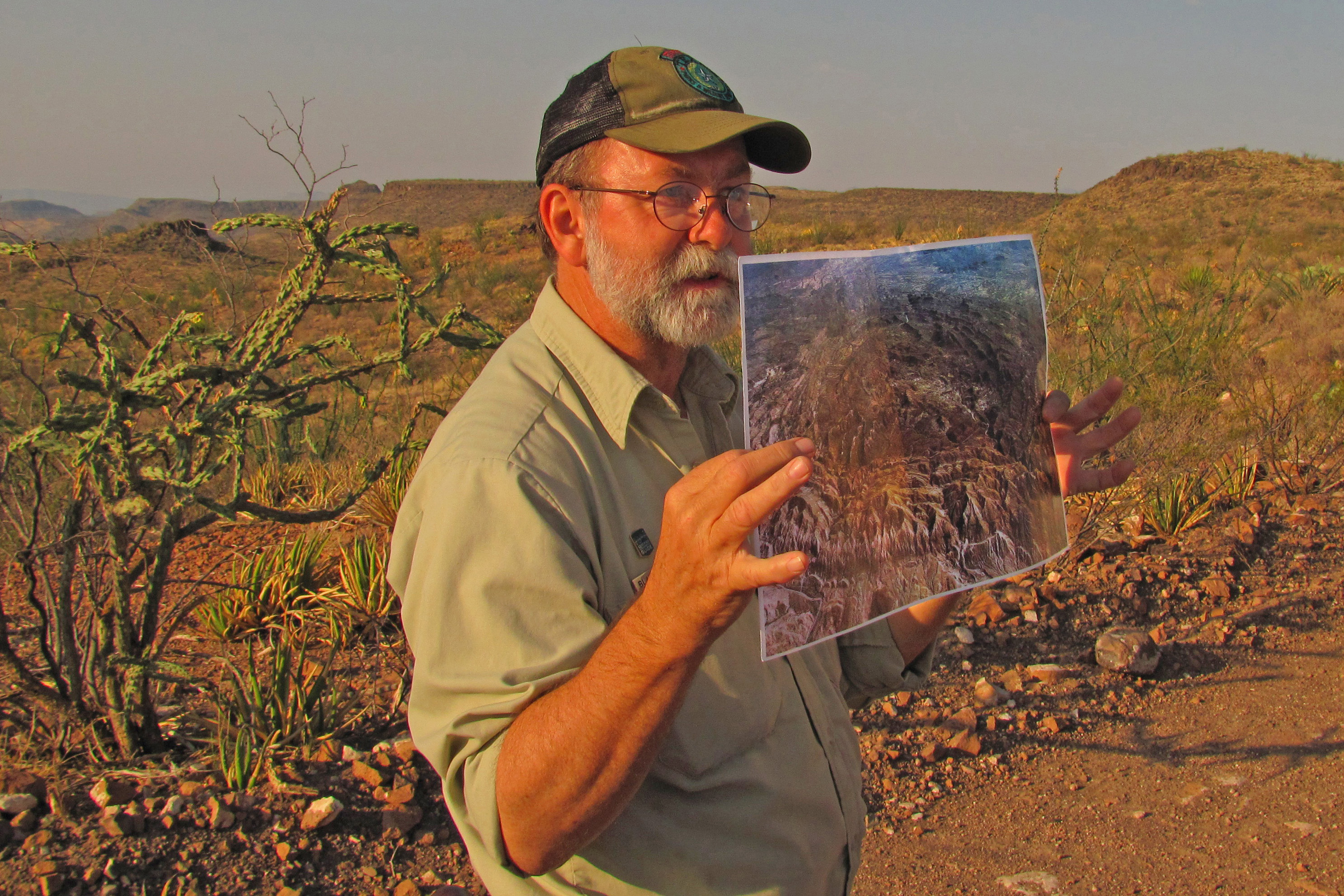 Blaine Hall joined Texas Parks and Wildlife in 2010 as an Interpretive Ranger at Big Bend Ranch State Park where he used a hands-on approach in explaining the natural and cultural history of the park. In particular, he helped visitors understand the geology of the park, how the geology controls the development of the park’s landscape, and how the landscape has affected the cultural and historical  development of the park. He was uniquely suited for this position because he was able to utilize his wide ranging industry experience, substantial teaching experience, and strong academic background. Blaine completed his B.S. in Geology at UT El Paso, received his M.Sc. in Geological Oceanography from Dalhousie University, and carried out research in marine geology and geophysics while at Lamont-Doherty Earth Observatory of Columbia University. His industry experience began with Superior Oil in minerals exploration for Proterozoic placer gold (South African type) and Kimberlites (Diamonds) in the Rockies, Canada, Kansas, and Arkansas. He then shifted to petroleum, beginning with studies of heavy oil reservoirs in California for Mobil Oil and continued with exploration and production programs in southern South America for Mobil while based in Buenos Aires. He went back to Argentina for Parker and Parsley and consequently, Pioneer Natural Resources. After leaving industry, Blaine returned to his native West Texas and spent the next ten years teaching Geology and Mathematics at Sul Ross State University. While at Sul Ross, he was also very active with the Chihuahuan Desert Research Institute where he developed a permanent exhibit on the geology of the surrounding Davis Mountains and presented workshops for teachers and many other youth and continuing education programs.

Since his retirement from TPWD in 2015, Blaine, now residing in Fort Davis, has continued studying the geology of Big Bend Ranch State Park and guiding the work of others there. He is helping direct the thesis research of Master’s students from Sul Ross State University on differing aspects of the Cenozoic volcanism and tectonics in the park, as well as, special projects for undergraduate McNair Scholars. Blaine is also actively involved with UT Austin faculty and staff in studies of the lower Paleozoic units now exposed in the core of the Solitario, an uplifted and eroded intrusive dome in the park.

Please help us and let your friends, colleagues and followers know about our page: HGS E & E - Geology at the Crossroads Big Bend Ranch State Park

You can also share the below link in an email or on your website.
https://www.hgs.org/civicrm/event/info?id=2012&reset=1
empowered by
CiviCRM