Registration is closed for this event
Wednesday, January 25, 2017
THE NEW Petroleum Club of Houston
1201 Louisiana Street, Houston, TX
- The top floor of Total Building
- Access to the Downtown tunnel system

Social 11:15 AM, Luncheon 11:30 AM
Cost: $45 pre-registered members; $50 for non-members/ ALL walk-ups (Credit Cards Now Accepted);
$40 for Emeritus/Life/Honorary; $10 for HGS student members if pre-registered and pre-paid.
To guarantee a seat, you must pre-register on the HGS website and pre-pay with a credit card. You may walk up and pay at the door if extra seats are available. Please cancel by phone or email within 24 hours before the event for a refund. Online & pre-registration closes Tuesday, January 24 at 12:00pm

Speaker: Khalifa Elderbak
Company: ALS Oil and Gas
The role of the Western Interior Seaway as a paleoceanographic corridor in the deposition of the organic-rich Eagle Ford Shale in Southern Texas

The Cenomanian/Turonian (C/T) boundary marine strata of the Late Cretaceous Western Interior Sea (WIS) exhibit a positive carbon isotopic excursion in the bulk-carbonate and organic carbon. This excursion marks the Oceanic Anoxic Event 2 (OAE 2), which spans the uppermost part of the Hartland Shale and one-third of the overlying Bridge Creek Limestone members of the Greenhorn Formation in the WIS and most of the Eagle Ford Shale in the proto-Gulf of Mexico. The interval is characterized by alternating beds of light-colored limestone and dark-colored marlstone and calcareous shale. These lithologic couplets have been related to Milankovitch orbital cyclicity. Foraminiferal assemblages from five selected sites indicate major perturbations in paleoceanography conditions associated with eustatic sea level rise and global warming. These sites include the C/T boundary Global Boundary Stratotype Section and Point (GSSP), the Rock Canyon anticline near Pueblo in central Colorado, the Cuba section in north-central Kansas, a section near Sioux City in northwest Iowa, the Anderson et al. Paradise 10-22-47-3W4 core in Northeast Alberta, and an undisclosed location of a core from southern Texas (Fig. 1). Despite the global nature of the OAE 2, the strata in the WIS indicate a local geological and oceanographic imprint. The north-south configuration of the WIS and the influence of southern Tethyan and northern Boreal water masses on the sedimentological, geochemical, and paleontological character of the seaway created a unique geological record with cycles of enhanced organic matter concentration that are key for hydrocarbon productivity prediction in Texas and the Gulf of Mexico. Foraminiferal assemblages of the Bridge Creek Limestone in the basin center record subtle cyclical alternations between limestones and adjacent marlstones or calcareous shales (Fig. 2). The similarity of the structure of foraminiferal assemblages and their response to climatic perturbations associated with OAE 2 in the central and eastern parts of the seaway suggest that both sides were under the influence of the same warm, southern watermass. 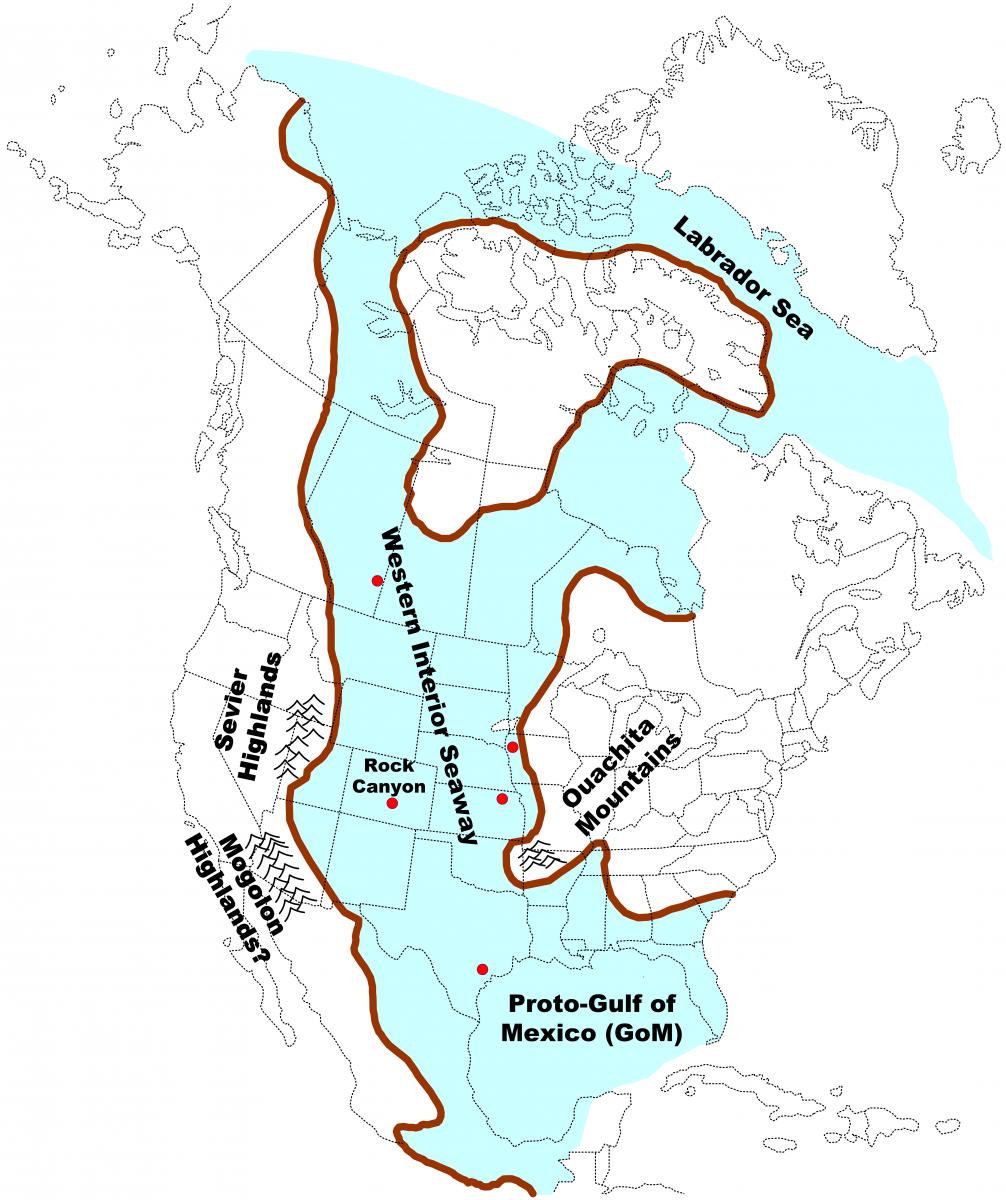 Fig. 1. Map of the Western Interior Seaway during Greenhorn maximum transgression in the early Turonian connecting the Boreal Sea and the Proto-Gulf of Mexico. The figure also shows the location of studied sections (red dots). 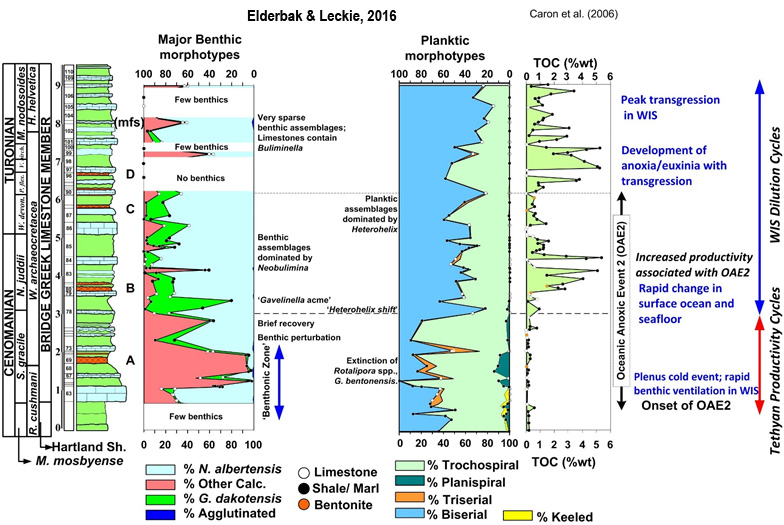 The organic-rich strata associated with OAE 2 in the WIS have been attributed either to enhanced surface water productivity or to oxygen depletion of bottom waters as a result of fresh water runoff and water column stratification (Fig. 3). In addition, different oceanographic scenarios have been proposed to explain the stratal and faunal variations of the Cenomanian-Turonian strata. Each of these scenarios, however, has its complexity. This study proposes an oceanographic model that invokes a cyclonic gyre operating in two different modes (strong and weak) to explain the lateral and temporal lithofacies and biofacies variations (Fig. 4). The weakening and strengthening of the gyre circulation and the changes in nutrient availability in the surface water resulted in deposition of organic-rich marlstone and limestone beds, respectively. Sea level rise during late Cenomanian and early Turonian time, and the increasing size of the WIS reduced the effect of water column mixing in the basin center by increasing the preservation potential of organic matter. The correlation of the sequence of events associated with the OAE 2 in the WIS to equivalent strata in Texas, in Eastbourne, UK, and at the Ocean Drilling Program Site 1260 in the Demerara Rise Basin of the tropical Atlantic reveals the global nature of these events and the importance of the WIS as an important north-south paleoceanographic corridor. During the C/T boundary interval, the WIS may have transported heat to Boreal basins as a component of Northern Hemisphere surface ocean circulation, and the WIS may have exported intermediate waters to the Proto-Gulf of Mexico and western Tethys.

Fig. 4. Surface circulation in the WIS during late Cenomanian-early Turonian and the relation between the WIS and the Proto-Gulf of Mexico (GoM). The pressure gradient was strong (left panel) due to high (P-E), allowing development of a strong counterclockwise gyre to operate within the seaway. The gyre drew southern, warm, normal saline Tethyan watermass (red arrows) into the basin along the eastern margin of the seaway, bringing with it a great amount of calcareous plankton and allowing deposition of limestone beds in the WIS. The cool, brackish Boreal watermass (blue arrows) was drawn into the basin along the western margin. The mixing of the two watermasses along an oceanic front allowed the formation of a denser third watermass that sank, ventilated the seafloor, and flowed toward the open ocean. During the weaker phase of the gyre (right panel), due to development of wet climatic conditions at the southern end of the WIS (low = P-E), the gyre drove less southern watermass and less calcareous plankton into the WIS allowing the deposition of marlstone beds. After Elderbak & Leckie, 2016 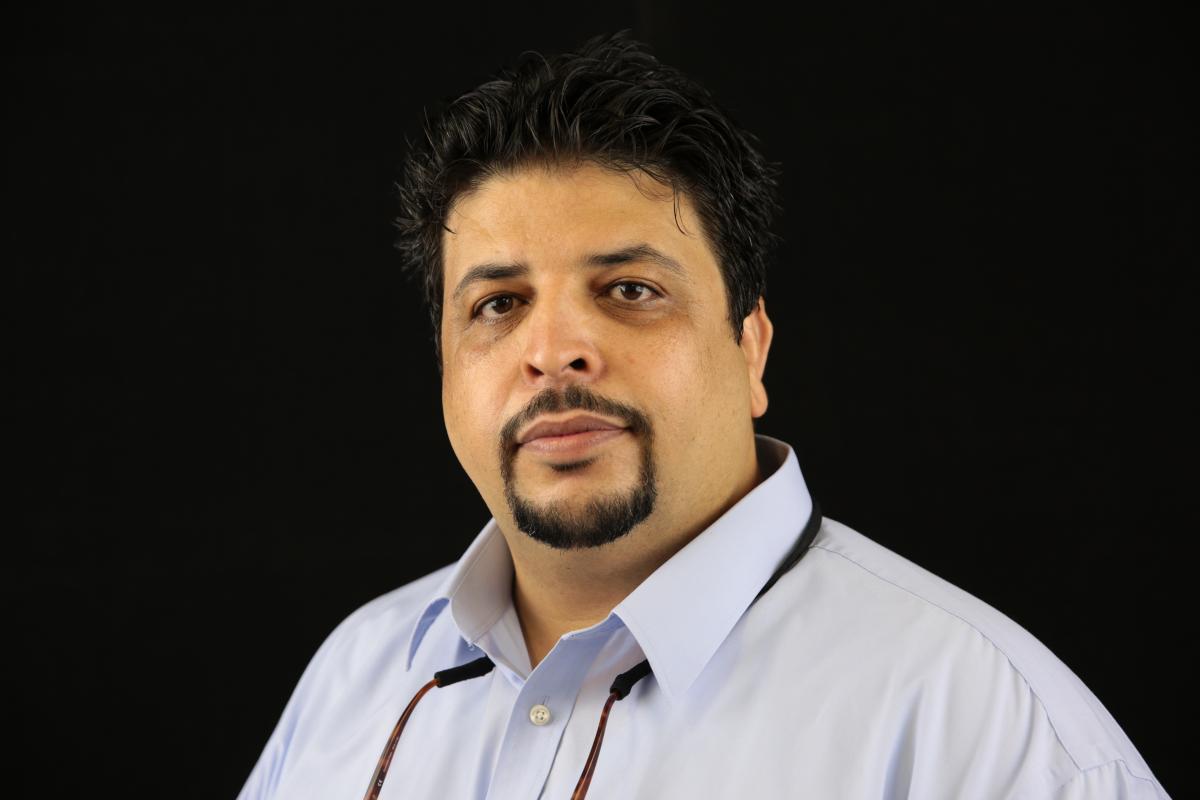 Khalifa Elderbak is a professional geologist with over 20 years of experience in academia, environmental sector and oil and gas industry. He has been a staff biostratigrapher at ALS Oil and Gas since March 2014. He previously worked as a consultant biostratigrapher on and off-shore Gulf of Mexico and North and western Africa. He graduated with a B.Sc. in Geology from Alfateh University, Tripoli, Libya in 1993, and M.Sc. in Earth Sciences from Carleton University, Ottawa, Canada, in 2004, He obtained his Ph.D. in Geosciences from the University of Massachusetts Amherst, USA in 2014. He has published and coauthored 3 peer-reviewed papers on the Cretaceous Greenhorn and Niobrara cycles in the Western Interior seaway

Please help us and let your friends, colleagues and followers know about our page: HGS General Lunch - The role of the Western Interior Seaway as a paleoceanographic corridor in the deposition of the organic-rich Eagle Ford Shale in Southern Texas

You can also share the below link in an email or on your website.
https://www.hgs.org/civicrm/event/info?id=1784&reset=1
empowered by
CiviCRM